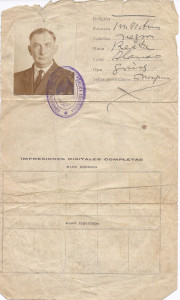 A few years ago, Zoe and I scanned hundreds of my father’s collection of vintage photos and postcards. I’ve shared the stories behind most of the the family history images I’ve collected. Zoe  learned a lot of local history along the way while preserving important mementos and photos.

My father lived a colorful life and left a deep lasting visual legacy for our family to share. 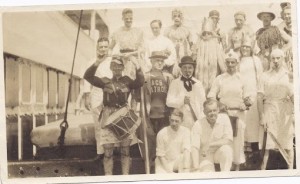 One particular personal story recounts the world wide trek my father Dr Homer A Speer Sr took from from Hong King to Egypt, France, Jerusalem, Mexico and throughout the U.S. What a journey it was! As the hundreds of vintage photos have been scanned more details emerge about the Speer pater familias.

Zoe’s researched serpentaria and I geography from the chair in front of my computer. I’ve seen Sao Paulo in modern times through Google Earth.

Here is a typical conversation that Zoe’s captured at her My Beautiful Life Story blog page:

“What do you suppose those hives are he is looking at’ says Homer, looking at a photo of his father circa 1924. It is sunny hot on this day almost 90 years ago.  Homer’s dad is wearing a full suit, hat and tie in the heat of the day. The vintage photo shows Homer Alexander Speer Sr leaning against a wall, peering into the moat behind the wall. 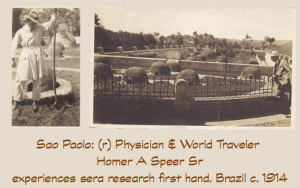 “I am sorting through the photos we’ve scanned to the antique photos folder “Wasn’t there a picture earlier of a snake we thought was taken in Peru? I think the guy holding the snake was standing in front of one of those too”. We look through Homer’s computer to find the particular group of photos I am talking about.

“From Homer’s Picasa album, we find the picture I’d scanned a few weeks before. Sure enough, the guy holding the snake IS standing in front of one of those hives. This photo has 1924, San Paulo, written on the back. Here is where the curious get hooked.

“ Let’s google ‘San Paulo Brazil snakes’ Homer!” Up pops the Institutio Batalan, built by Brazilian physician Vital Brazil in 1901. Our curiosity is as strong as Dr. Speer’s was on that long ago journey. Piloting his computer via Google Earth, Homer flies us over the same spot almost a hundred year’s later by satellite and mapping. 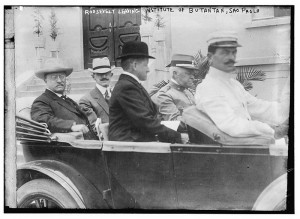 We can’t see the serpentaria in the photos we pull up on google earth. The Google car didn’t drive into the compound of Institutio Batalan when it was mapping San Paulo this century, but in 1914 Teddy Roosevelt did.

Turns out, anti-venom and a lot of other research has been conducted in San Paulo for over a century, making it a world renowned center for sera and other pharmaceutical development. This is why Teddy Roosevelt was here in 1914, and Dr. Speer arrived a decade later. 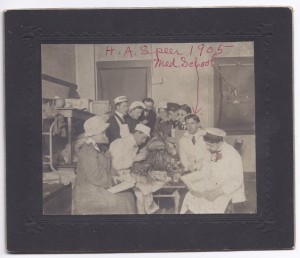 My father Dr. Homer A Speer Sr was educating himself about serum development and the medical advances that would benefit people globally from research being done in Brazil.